Most of my foster dogs with issues have now been adopted! Gucci, Jet, Blondie and Annie Beagle all found wonderful homes! Also Leroy was adopted, and Lulu and Gus are both in foster-to-adopt homes. I also took in these temporary foster dogs:

Josie, Ginger and Sarge came into rescue along with two other dogs from a hoarder/collector situation. They are friendly and sweet, and within a week they went out to other foster homes.

Josie has a habit of squeaking instead of barking. She is a very small dog and very sweet and loving. She might not be the smartest in the bunch, but she is one of the happiest.

Ginger is only eight months old which might explain why she has so much energy. She is a very athletic dog and will often climb on your back, your shoulders, or the top of your head. For the few days she was here I was teaching her to jump into my arms on command, because it was preferable to having her jump on me when I wasn’t ready. Even with all her energy she is very sweet and likes to cuddle and lick your face and your ears, and she is very determined to do so even if you sit curled up in a ball with your hands over your face.

Sarge is a Beagle/Jack Russell Terrier mix. He was good with most of the other dogs but thought that he was in charge and tried to scare away all new dogs that came in, so he went to a foster home where there aren’t so many new dogs all the time. 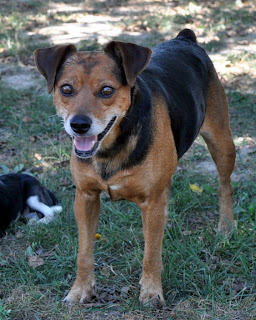 Charlie Mac was only here for two days, and that was just long enough to realize that he was a goofy boy that likes everyone and has no concept of personal space. Since I already have one of those (named Eeyore), Charlie Mac quickly went to another foster home where he was a perfect fit. 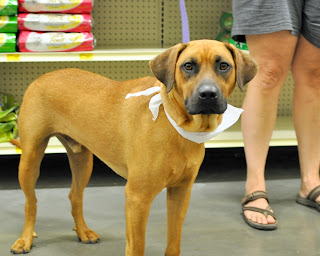 I also took in eight puppies that had nowhere to go. They are some sort of Hound mix, and they’re around ten weeks old now. They will be moving on to other foster homes as space becomes available, and should be available for adoption within a week or two.